Serendipity is an important factor of today’s internet findings; oversaturated with lots of information, the world wide web hides in its deepest layers the truly interesting information – the same rule applies to music. There are many record labels worth a listen, but one cannot cover them all. I found Small Stone Records on Soundcloud, then arrived at Lo-Pan’s Bandcamp profile, which did not seem too promising. Still, I gave it a shot.

Lo-Pan is a stoner rock band which released its fourth album on the 4th of October. Although the songs do not have a specific scent (not all bands manage to develop a unique sound), this album is full of energy; better a good-but-not-mind-blowing rock LP than a silly indie album. The group’s message is not original or convincing enough to produce an internal combustion in the listener and Jeff Martin’s voice does not seem to align with the sound.

Regulus is the first song of the album. The instrumental is well balanced, the sound is clean and smooth. Personally, I think the vocals are not suited for the stoner genre, lacking any sort of modulation, but eventually Jeff’s voice melts in the dough. The second half of the song seems to stagnate and leaves the impression of restraint from any sort of emphasis. Overall, the song is good, even if at times it slips into a boring repetition.

Land of the Blind doesn’t send any message, being a 3 minute piece of boredom. The last minute delivers through the guitar a sort of frenzy, still too peaceful. The lyrics try to convey an anarchic and/or apocalyptic vibe, but the lack of force of the instrumental part manages to ruin any speck of meaning.

Marathon Man’s repetitive guitar sound manages to induce a state of ecstasy that overshadows the vocals that I am not even paying attention to. Esentially, this song is about running, but the music is incapable of making me move. The guitar has a rusty touch and the bass assists calmly in the background, with small interventions when it drags itself through the rhythm, playfully bending it.

N.P.D. is a short piece (2’27’’) where the vocals are more aggressive than the music which is stagnating. The last seconds save the overall atmosphere, managing to surpass platitude. As the album unfolds, Jeff’s voice becomes harsher and “proper” to the groovy style of the music.

Colossus and The Duke are flaccid tunes that fit the rock song standards. The music is not dense enough to capture attention, being just a pale junction of noises.

Vox has a nice languid feeling that drips slowly from your ears down to your body through the interludes. The vocal parts bring a mild sting to the sound preventing a total hypnosis. The vocalist seems trapped as well into this spiral of psychedelic smoke where the listener was lured.

Eastern Seas has a blues touch, talking about alienation. The sound transitions from melancholic riffs back to the stoner pattern. The vocal part fastens the whole composition. A tuneful song which was “fan approved” in Lo Pan’s previous concerts.

Relo is another short piece (2’28”), the most genuine stoner sound of the album. You don’t really know when it starts and ends, the song appears out of the blue and vanishes just as fast.

Even if only a few songs deserve a highlight, the LP is an enjoyable listen, but not a memorable one. It is easy music, the kind that you idly dance to and then forget about. 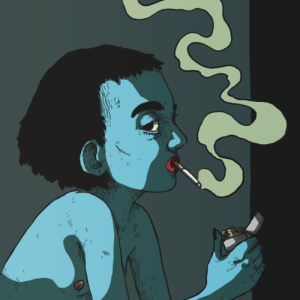