“$17.75.”
“I’m just sayin’, you don’t see that every day. A gas pump spoutin’ Bible verses at you, damn
bright display near blindin’ you an’ all. If I wanted some damn proselytizin’ I wouldn’t have stopped for gas in the first place. Be a lot easier to just miss the next turn an’ meet the big man himself, if you know what I mean.”
“It’s $17.75.”
“I’m just sayin’, man. What business do you have puttin’ the damn Bible on show like that? I
thought it was supposed to be divine script an’ all, not just some ornamental text to spruce up the
middle o’ nowhere?”
There is nobody else inside the station, it is well past midnight along the interstate. The man waits
for a response from the clerk, trying to pick up some hints of a reaction, anything betraying fear,
guilt, discomfort. Boredom. The clerk’s expression is blank, his eyes tracing two flies as they circle
the empty aisles, collide mid-air, then resume their flight toward the unlit corners of the station.
His focus falls back on the man, having heard none of his previous words. There is nothing save
for a ragged hat to show that he has spent even a day on earth: perfect skin, pearly whites, wet
eyes. Unimpressive.
Deciding not to mention the clerk’s absent manner, the man picks up the pace of his speech, his
patience running thin.
“—an’ anyway, why is there just the one pump? If I were to come ‘round with a buddy of mine
we’d have to take turns usin’ the thing. How’s that for a predicament, pal?”
“Sorry, what was that?”
“I said, what if I had to stop by this gas station an’ take turns on the damn gas pump, how’s that
for some trouble? And what’s with the damn flies in this place, anyway? What do you do, breed
the damn things? This buzz is near killin’ me!”
Suddenly paying attention, the clerk looks up and catches the man staring at the station’s back
exit, bolted shut and chained. There are visible marks tarnishing its white paint, some grooves
deeper than others, most of them overlapped. Making eye contact intently, the clerk intercepts
the man’s question, baring a set of tobacco-stained teeth as he opens his mouth. He begins to
speak and his eyes turn watery, a muddy shade of bog-green that transfixes the man. The buzzing
vanishes into thin air, unnoticed, as if it never existed.
“Rats as big as dogs in these parts, can tell you that. It’s why I keep this shovel on hand. Don’t
have to worry about your buddy visiting, either. Nobody comes around anymore. There’s all sorts
of things going on in town, talk about vandalism, theft, arson, inside jobs. Kids these days, you
know, they think they’re invincible, immortal, what have you. It used to be they looked up to their folks. Now there’s one thing on their mind and that’s trouble. If anything, those verses there were supposed to knock some sense back into the world. An offering, if you will. Can’t be making an omelet without breaking some eggs, now, can you? Good or bad, it all goes down the same route.
Too bad nobody’s gonna see it anymore, either, not since— well, I’m thinking we should have
some peace and quiet soon enough. Anyway, that’s, that was $17.75. Look out, mister. The fog’s
getting thicker where you’re headed. Best not to linger where you don’t belong.”
Taken aback, the man fails to reply at once, trying to follow the speech and find some way to have
the final word. Noticing the open palm of the clerk hovering in mid-air, he fishes a crumpled twenty out of his pocket and pushes it across the counter, careful not to disturb the arrangement of glimmering trinkets and snack bags. The clerk reaches out to collect the bill with his right hand.
His delayed air betrays no intention to produce any change. Suddenly he grabs the man’s palm
in his left and squeezes it instinctively, transferring a film of ice-cold sweat onto the stranger’s
skin. The clash is brief, pulsating, followed by unrushed, methodical movement.
“Good night to you, sir.”
Heading back toward his car, a faint clanking of bells hung above the station’s door accompanies
the man. The parking lot is enveloped in a dark fog, not a moon nor star to aid his return. As he
enters his car, the man glances at the backseat – empty – then finally peers back at the gas
station while starting the engine. Across the parking lot, only two visible flickers pierce the fog
blanket. To the left, a pair of green, unblinking eyes cut through the distance, fixing their gaze on
his unaltered expression. To the right, the Lord’s sacred word scrolls on a screen screwed to the
gas pump, endlessly rewinding. The man drives away, not looking at the road ahead, but still
staring in the rearview mirror.
“—and I will stretch out my hand against you and make you a desolate waste. I will turn your
towns into ruins and you will be desolate. Then you will know that I am the Lord.” 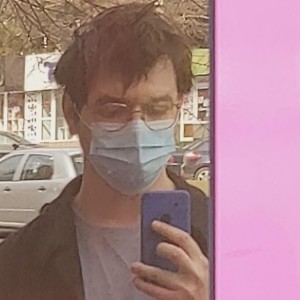